In my home river are not many trouts. It’s more a river of „coarse fish“ how the english would say. But the nymphing for chubs is really fun. They are not easy to catch. Often I think they are harder to catch then trout.The good thing about chubs is their size. They are much bigger than the average trout.

In the last time, I discovered, that the chubs love nymphs with an orange hot spot. So I tied some and I caught some really nice chubs, which you can see in the posts of the last days. 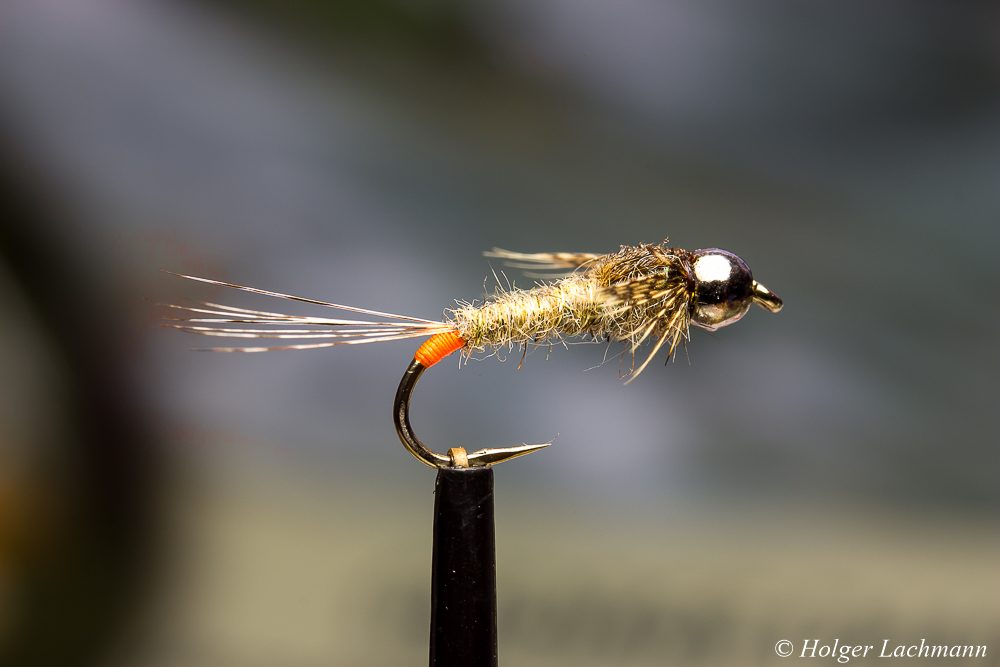 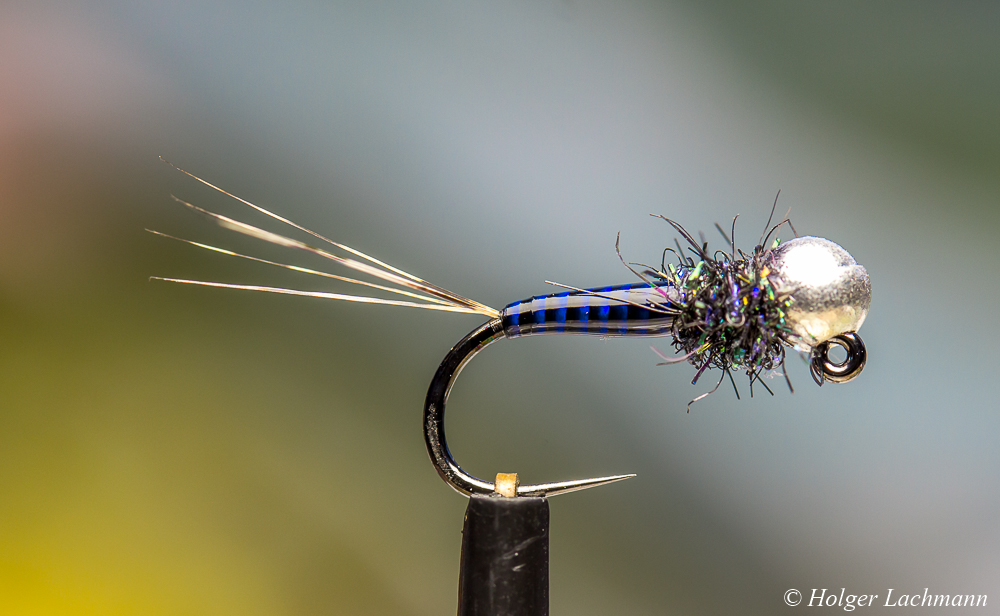 Alex Keus from FLYBEI Fly Fishing School and Guide Service said to me, that I should tie a „FLYBEI-Nymph“. I asked how it should look like and he just answered „Surprise me!“.

I know that he’s great in modern nymph techniques, so it has to be a Hanak hook and a little 3mm tungsten bead. Then I remembered, that we once talked about the dubbing I recently bought and he said I’d forgetten to buy the best – the blue one! Ok, he likes blue… time to use the blue Polish Quills. I’ve never used this color before. Just a little Coq de Leon tail and some Peacock Dubbing and the fly is finished. He likes simple nymphs, which sinks extremly fast, so no legs or fancy CDC on this nymph, which slows down the sinking speed of the fly. I hope he likes it! ;-)

Short visit at the river before the rain started. No action until I changed to an tungsten bead nymph with an orange hot spot. That was the key today. 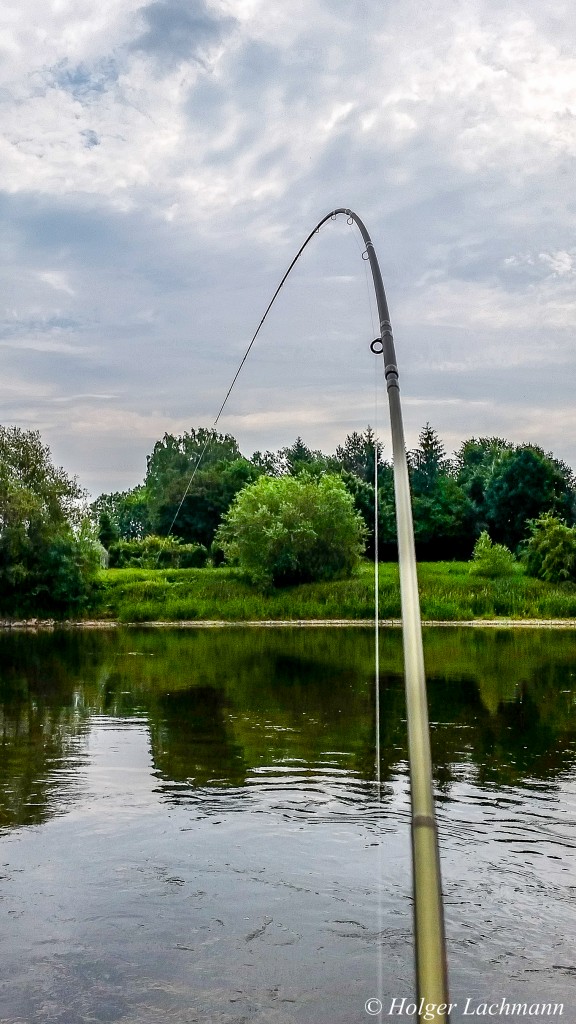 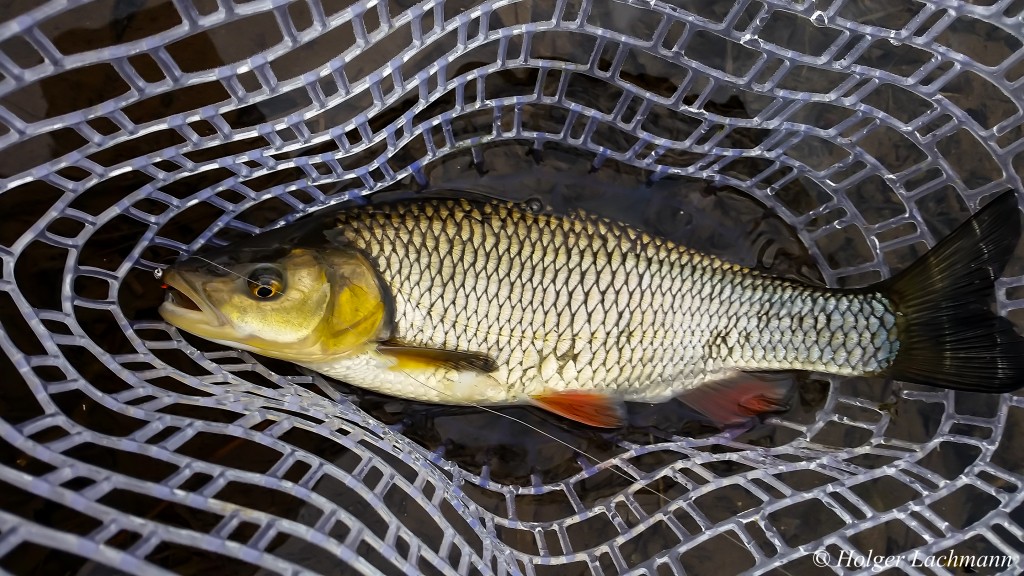 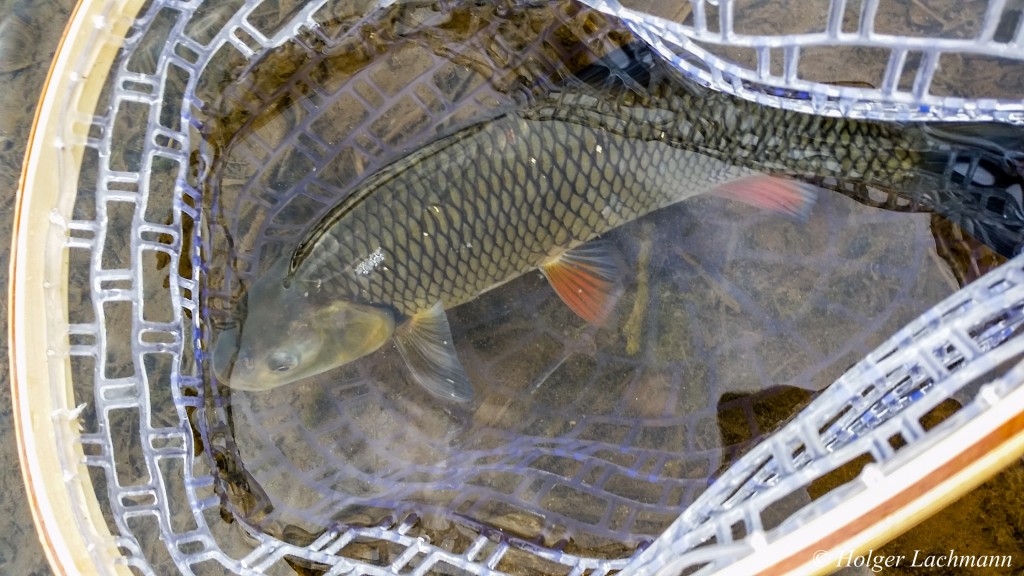 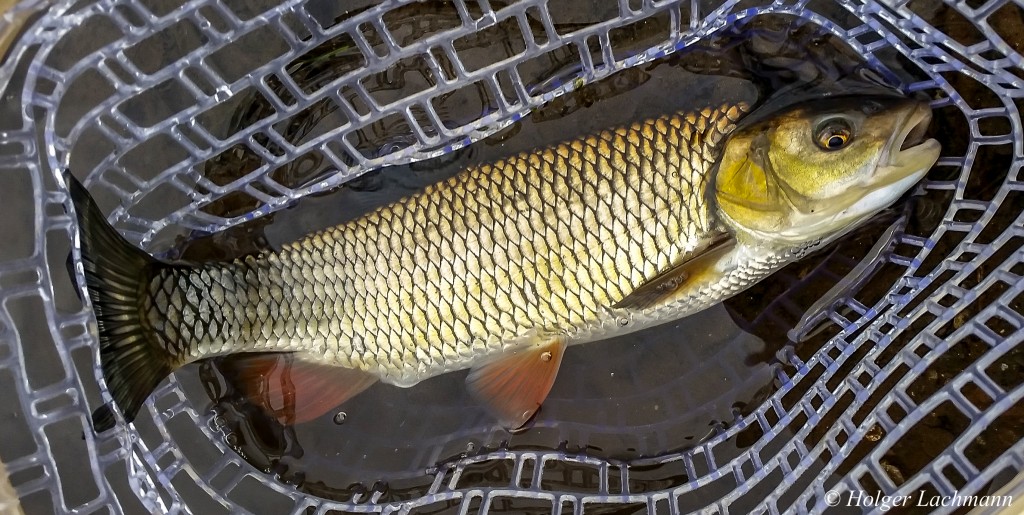 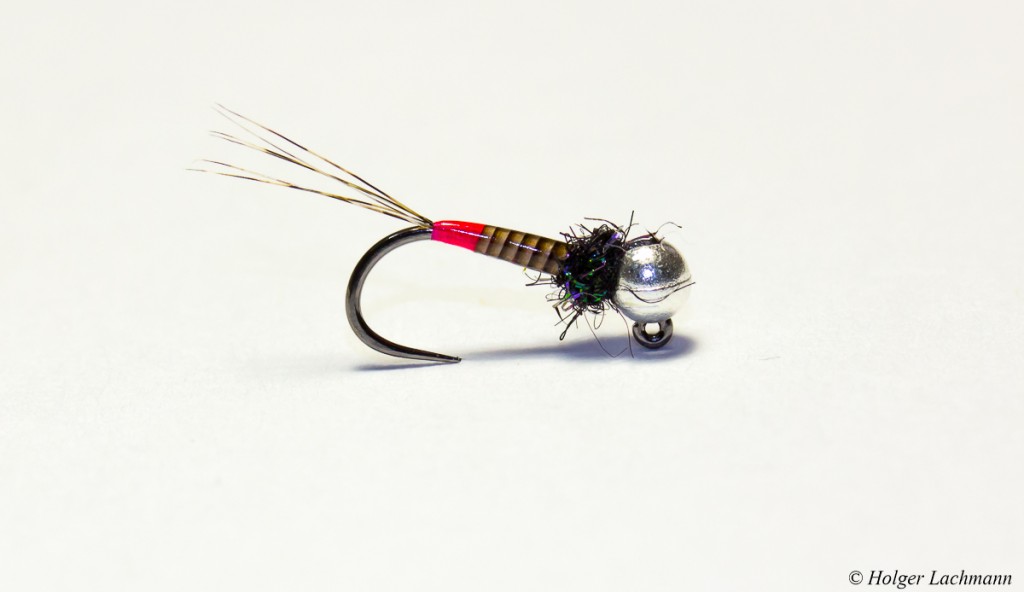 Click to enlarge for a better quality of the picture

I was often asked, how bead chain eyes or dumbbel eyes should be tied in, so they won’t twist around the hook shank or getting loose. It seems like a simple task to tie them in, but there are some mistakes you can avoid to get a better result.

I didn’t wanted to do a „how to…“ about it, but I saw a good tying video about a nice streamer pattern yesterday. The fly tyer in the video did the same common mistakes like so many others. He used super glue to fix the eyes, but only at the end on the turns as a kind of topping, and as a topping, super glue can’t show it’s real strength.

So, I made some pictures and I will show you how to tie the eyes in – the ROCK-SOLID-WAY ! 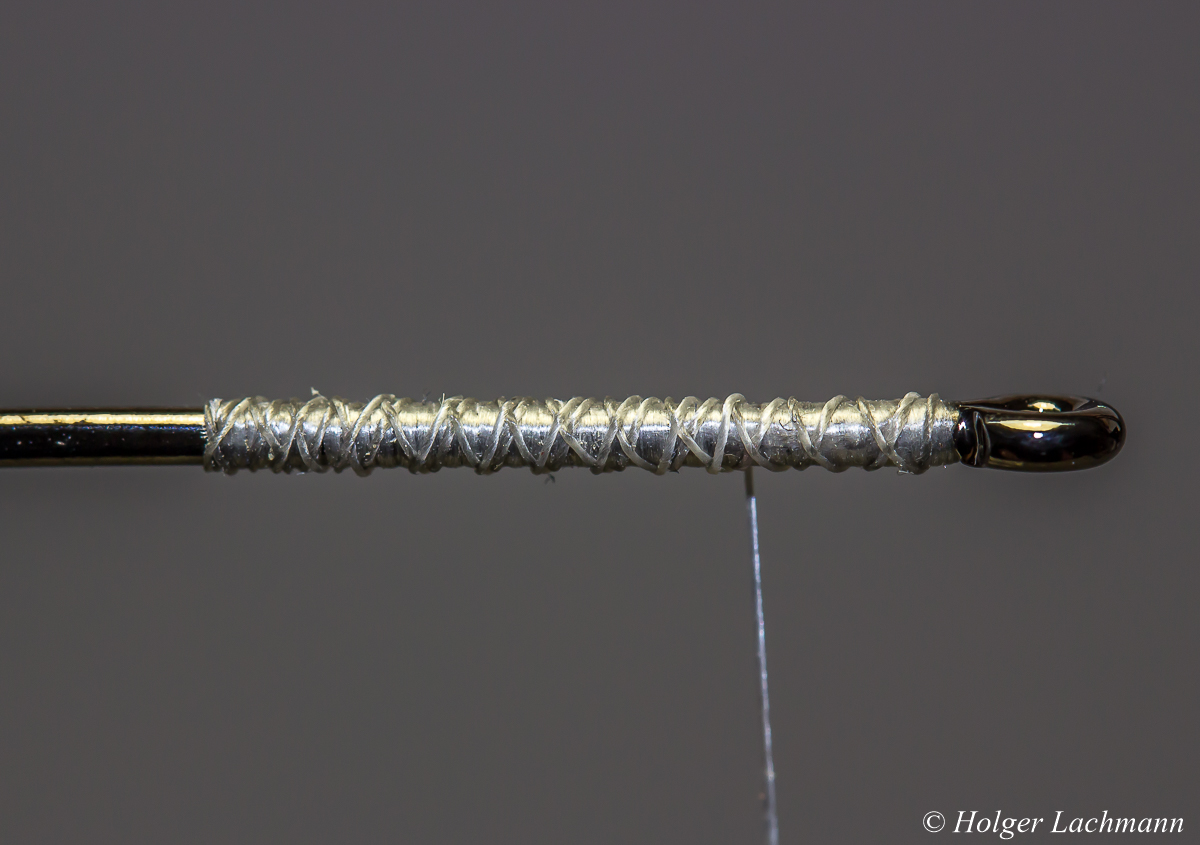 If you use G.S.P. thread, you should rotate your bobbin to twist the thread. Otherwise the G.S.P. is too slippery to create a good solid basement for the eyes.

Ok, let’s start with the bead chain eyes: First, brush some super glue onto the hook shank. I like to use super glue gel. 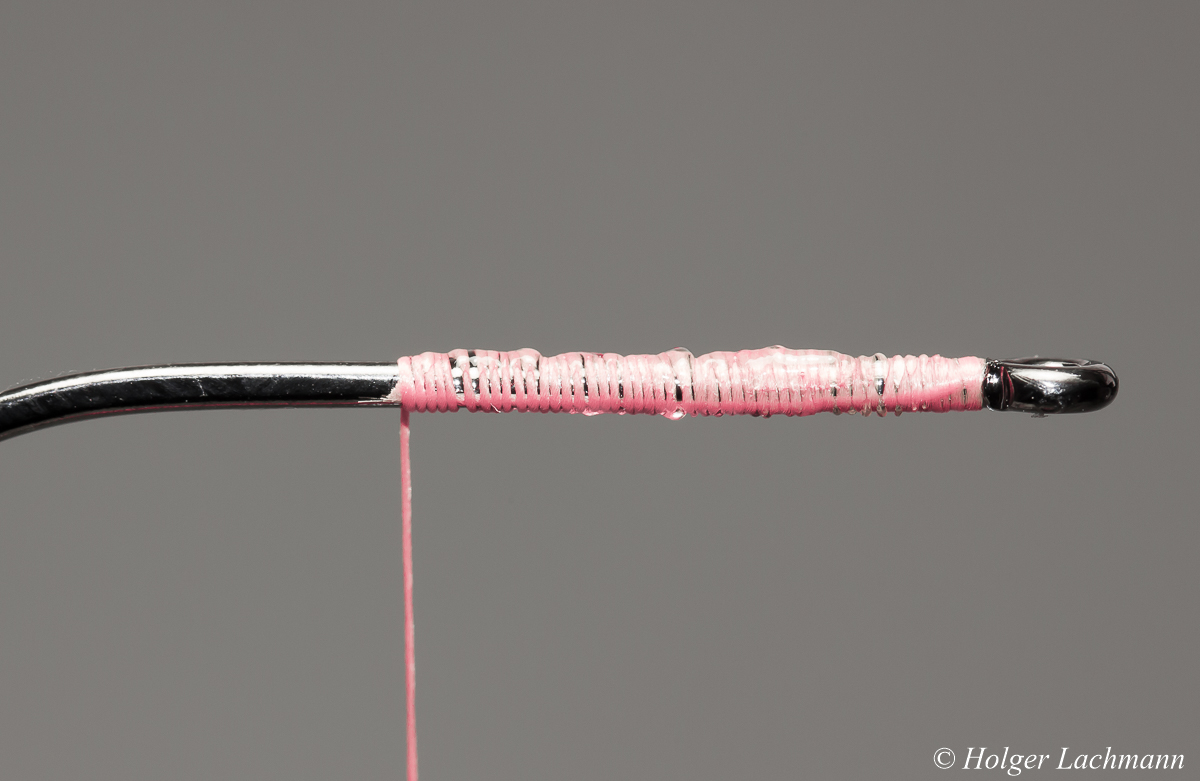 Twist the tying thread and do a nice layer of thread as a basement. Some glue will be pushed out between the windings of the thread. Don’t whip the glue away. 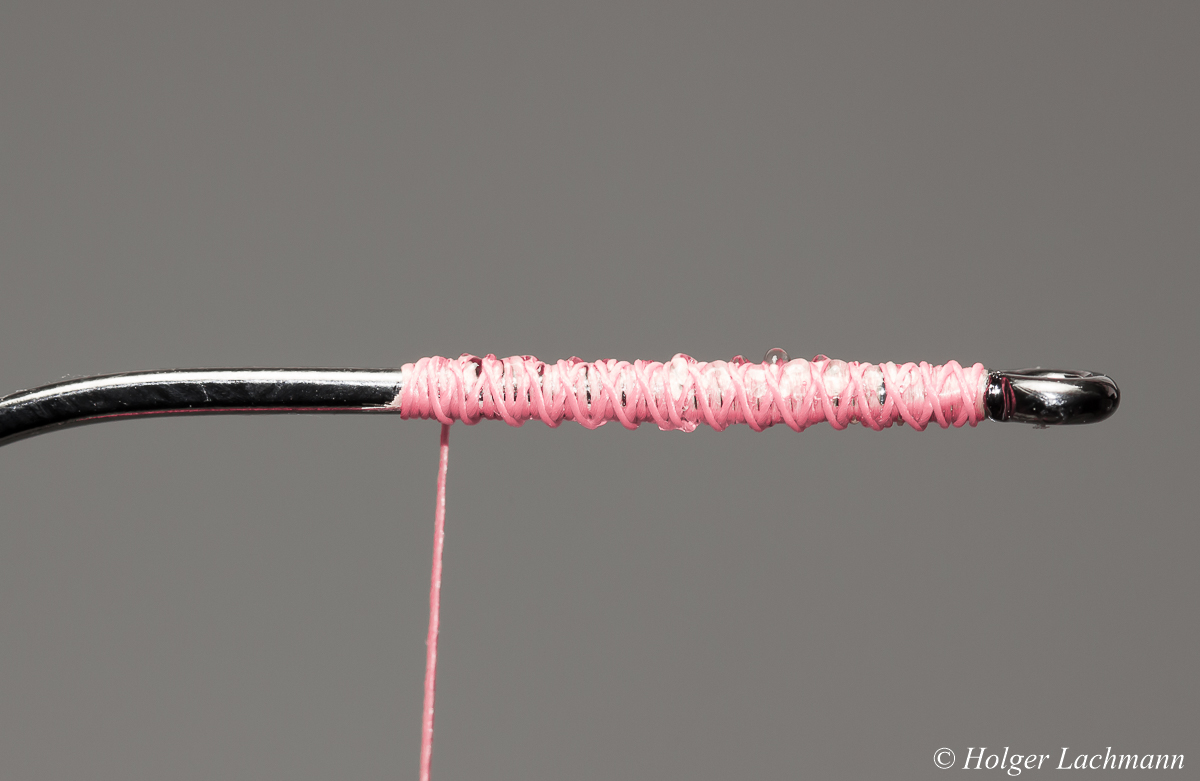 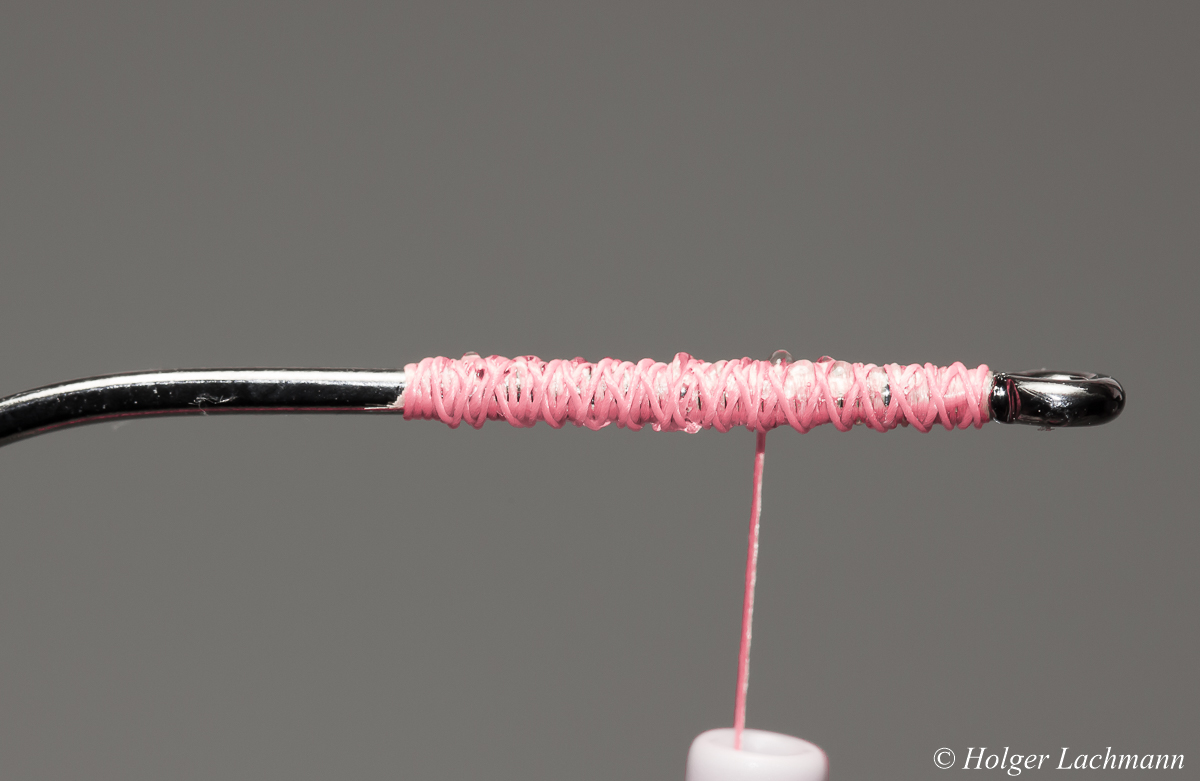 Go with thread in open windings from the back to the front and then to the back again. Then, wind the thread to the position, where you want to tie in the eyes. You can see, why you shouldn’t wipe off the super glue from the first tying step. You should tie with maximun thread-tension ALL THE TIME! 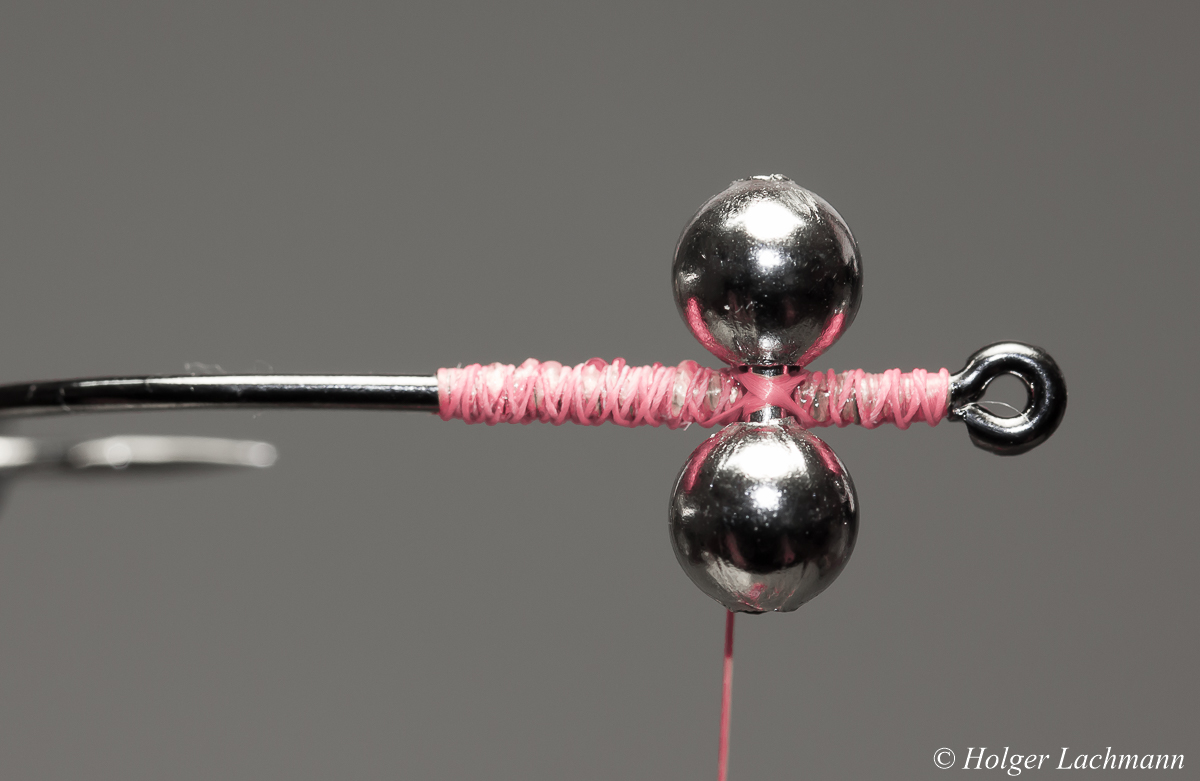 Tie in the bead chain eyes with only 2-3 turns of thread, not more! 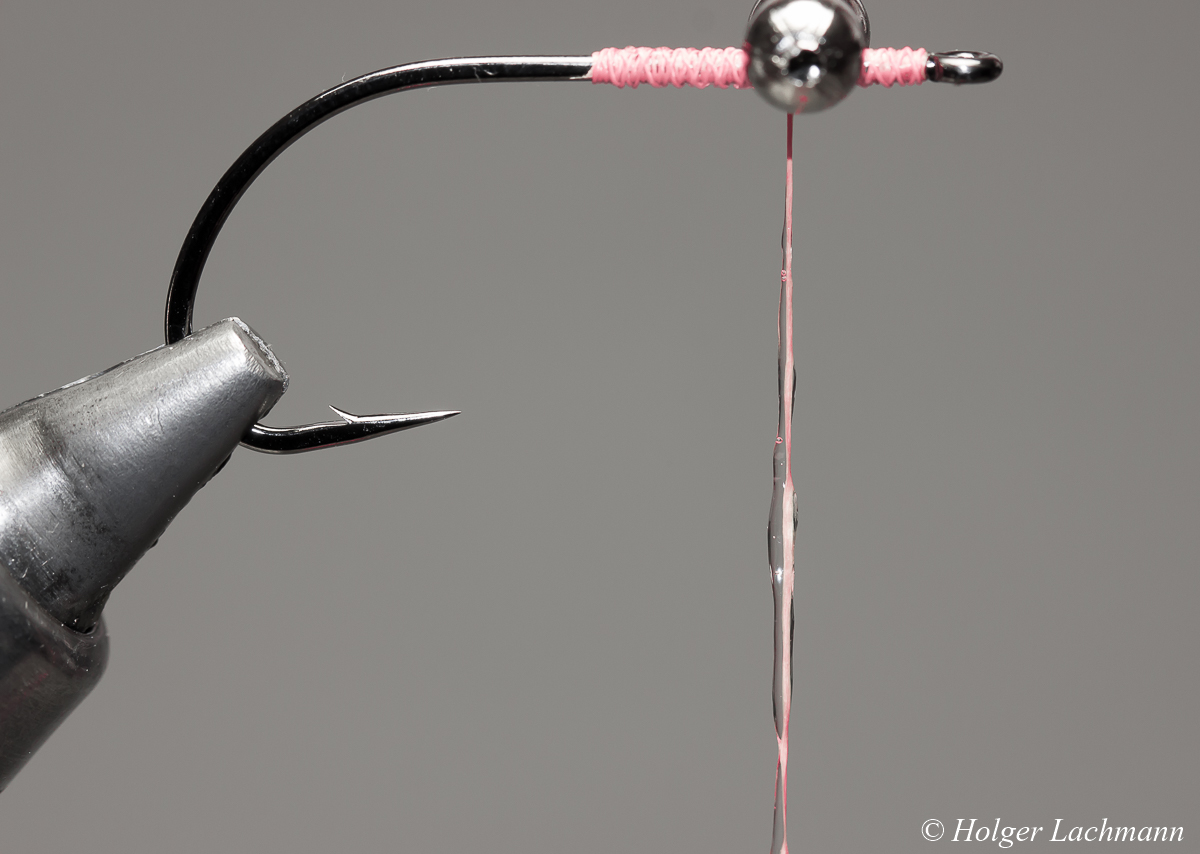 Now comes the „trick“: Brush some super glue on your tying thread like shown on the pictures. 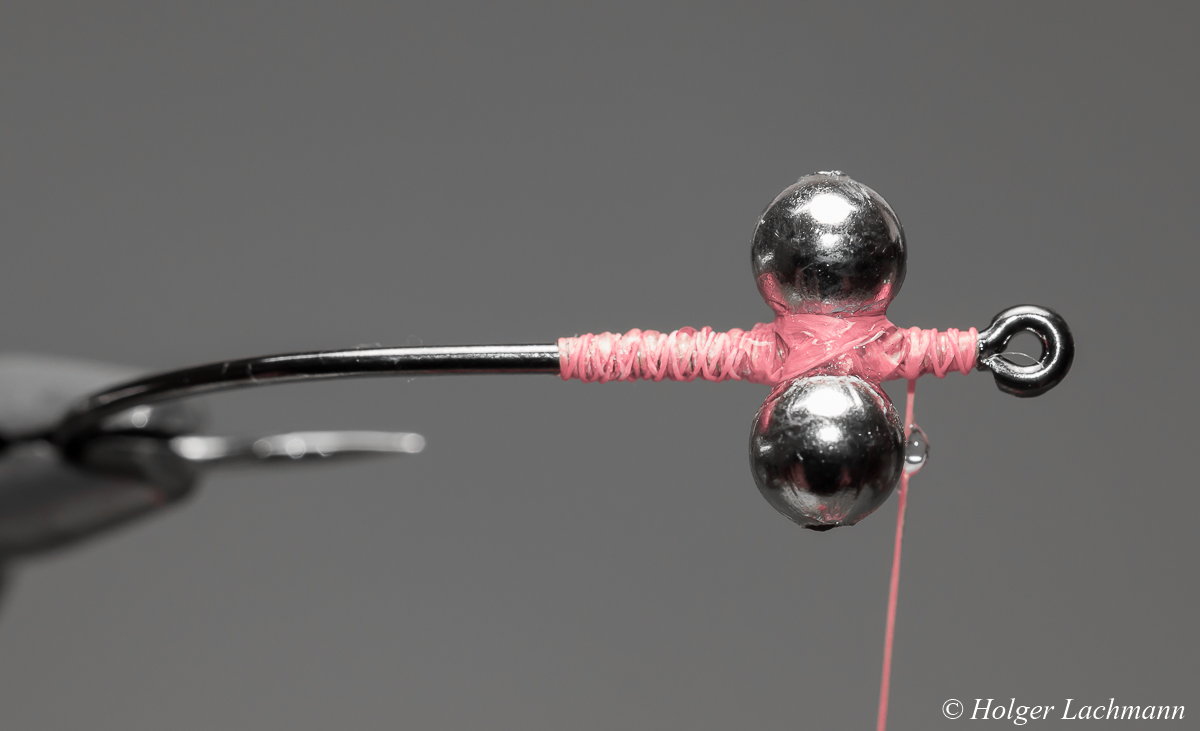 Wind the thread with the super glue in figure-8-turns around the eyes and the shank, like you normally do. Make sure, that the glue is everywhere. That’s the most important thing. The glue is not only on the top of the windings, it secures every single turn of thread and so it creates a perfect connection between hook shank, bead eyes and thread. 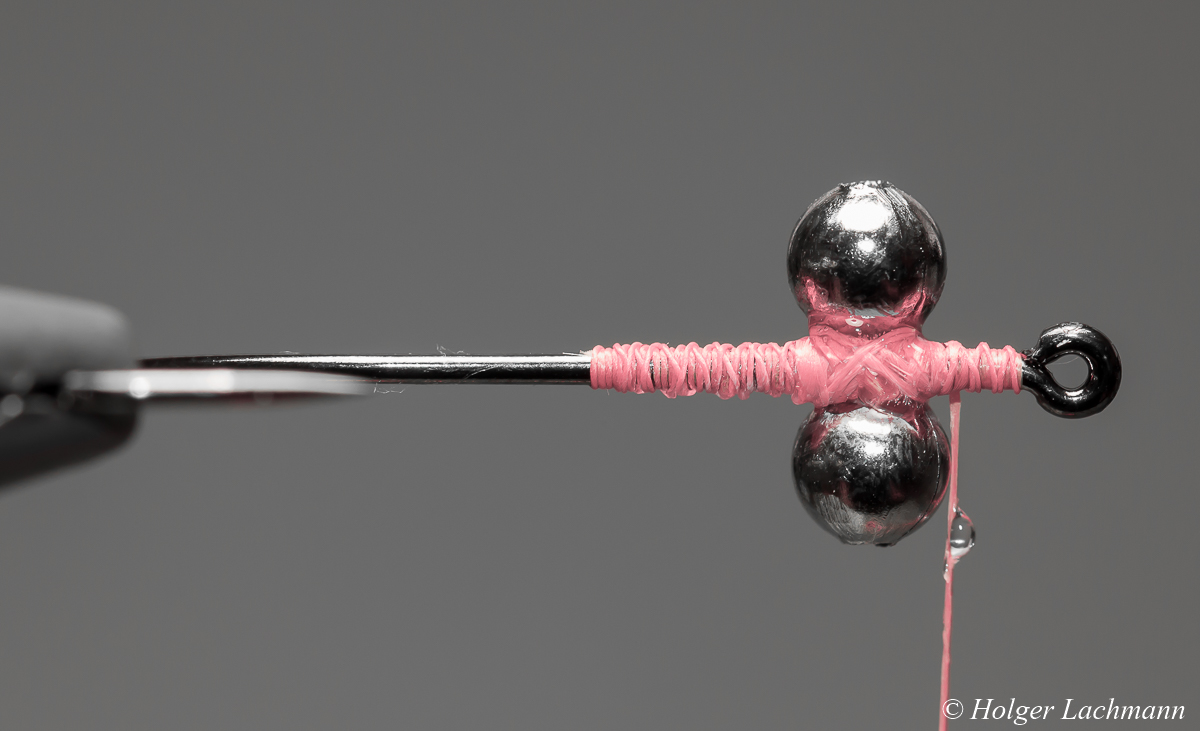 View on the underside of the eyes. You can see how the glue is pushed from one turn of thread to the next to create rock-solid bead eyes which won’t move, twist or slip no matter what you are doing to them during fishing. If you did it right, you will need pliers to twist them. The only way to connect them even more solid to the hook is to weld them onto the hook shank….! ;-)

When you like to use dumbbell eyes, you may need a larger basement to secure them. 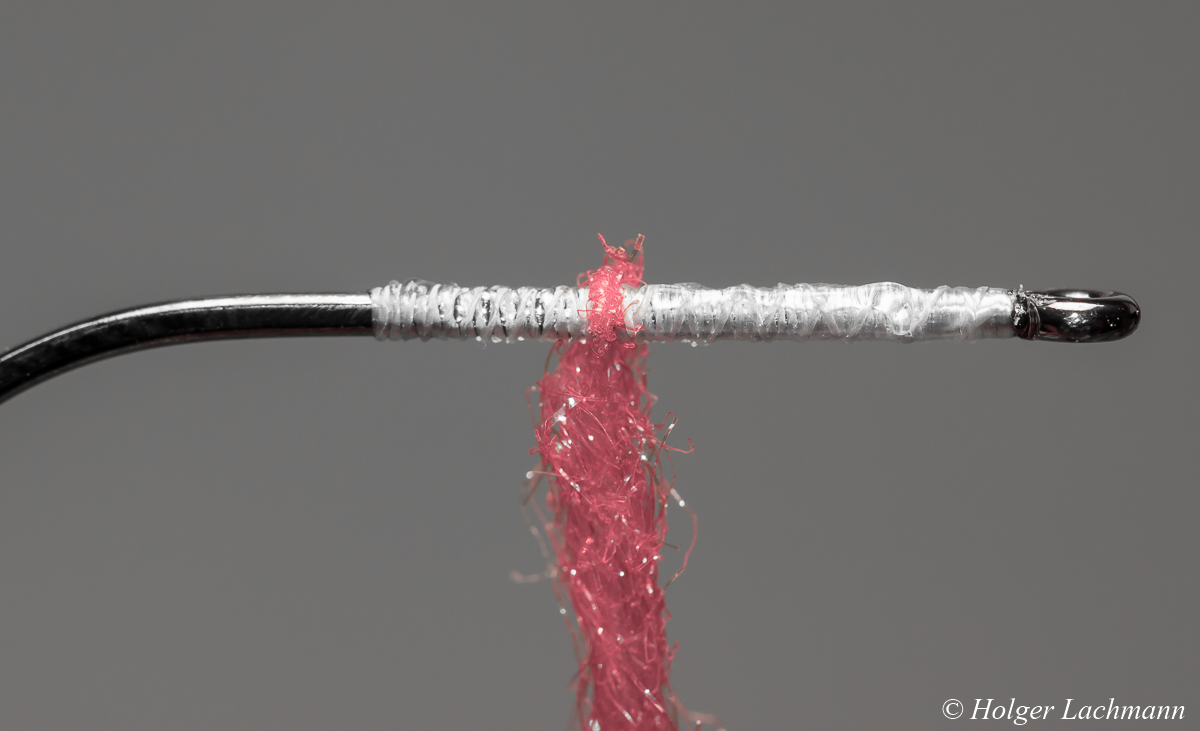 Tie the thread on the hook shank in the same way, like shown before with the bead chain eyes. Then take some dubbing (no matter what kind of dubbing, but synthetic works best), make a first turn. 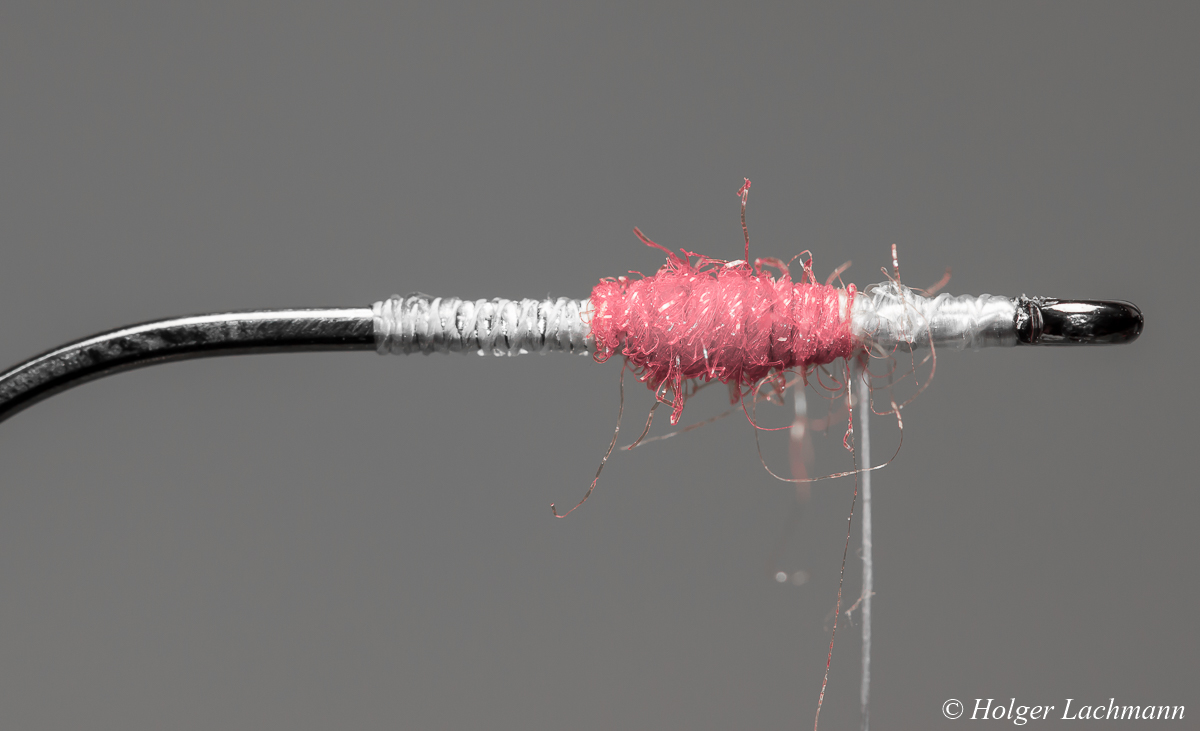 Twist the dubbing around the thread to create a little dupping rope and wind it around the hook shank. 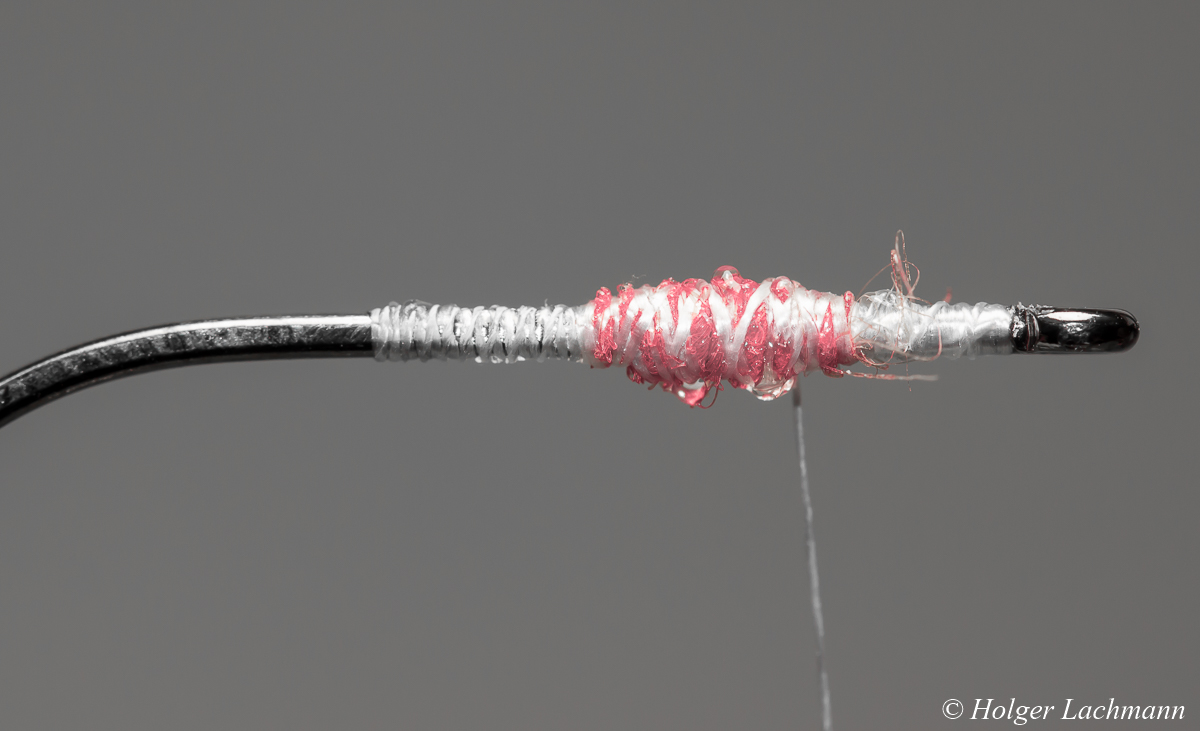 Put some super glue on the thread and do some open turns with your glue-thread back and forth over the dubbing with HIGH THREAD TENSION! Now, you got a larger solid basement for the dumbbell eyes. 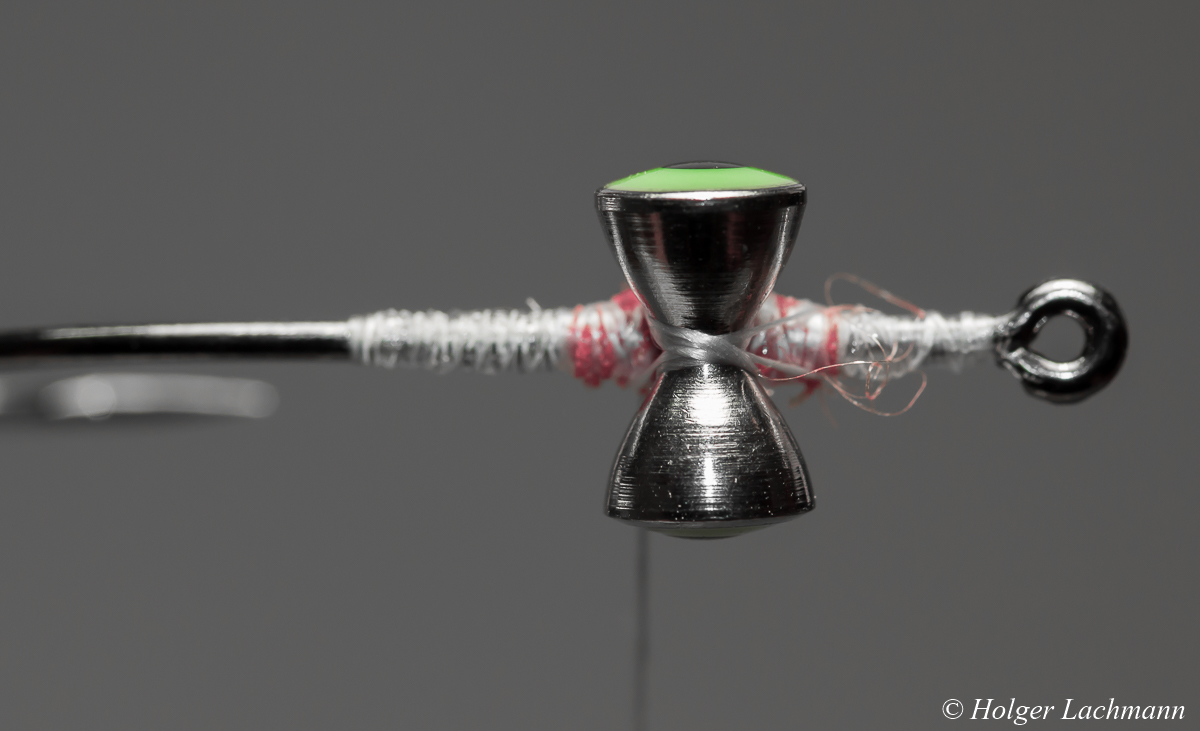 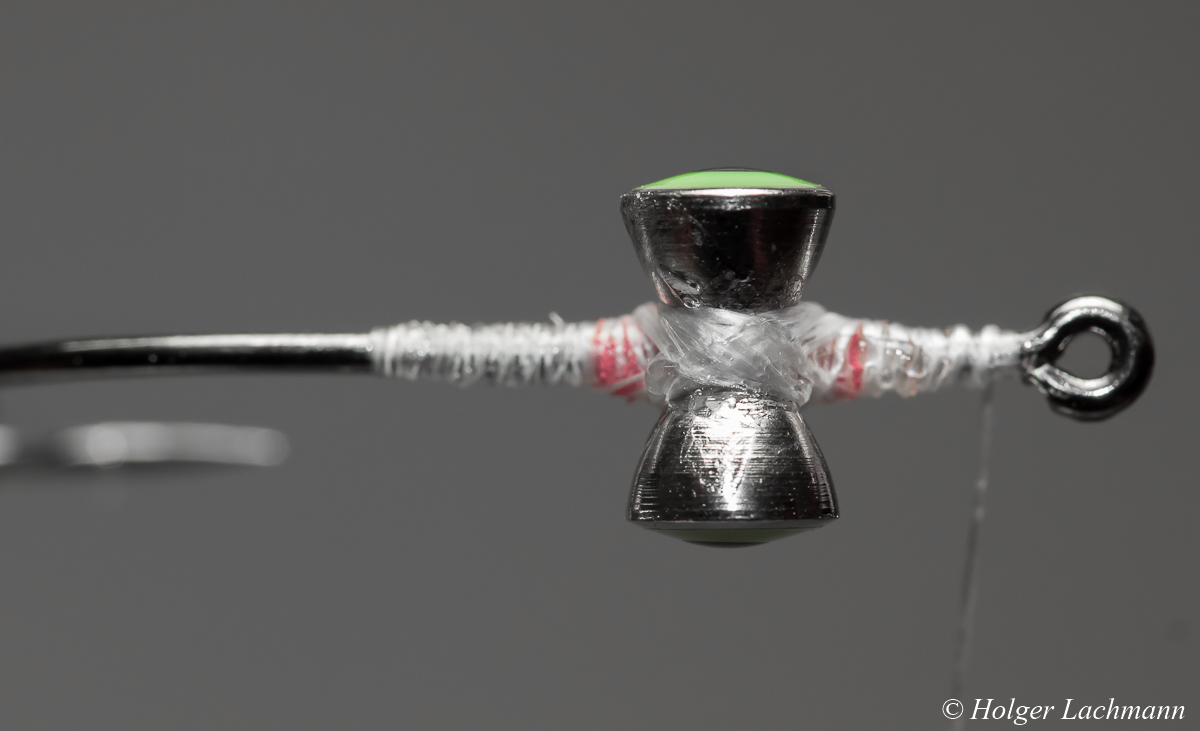 The next steps are the same like with the bead chain eyes. Attach the dumbbell eyes with 2-3 turns on the hook, put some super glue on the thread and wind it figure-8-like around the dumbbell eyes. 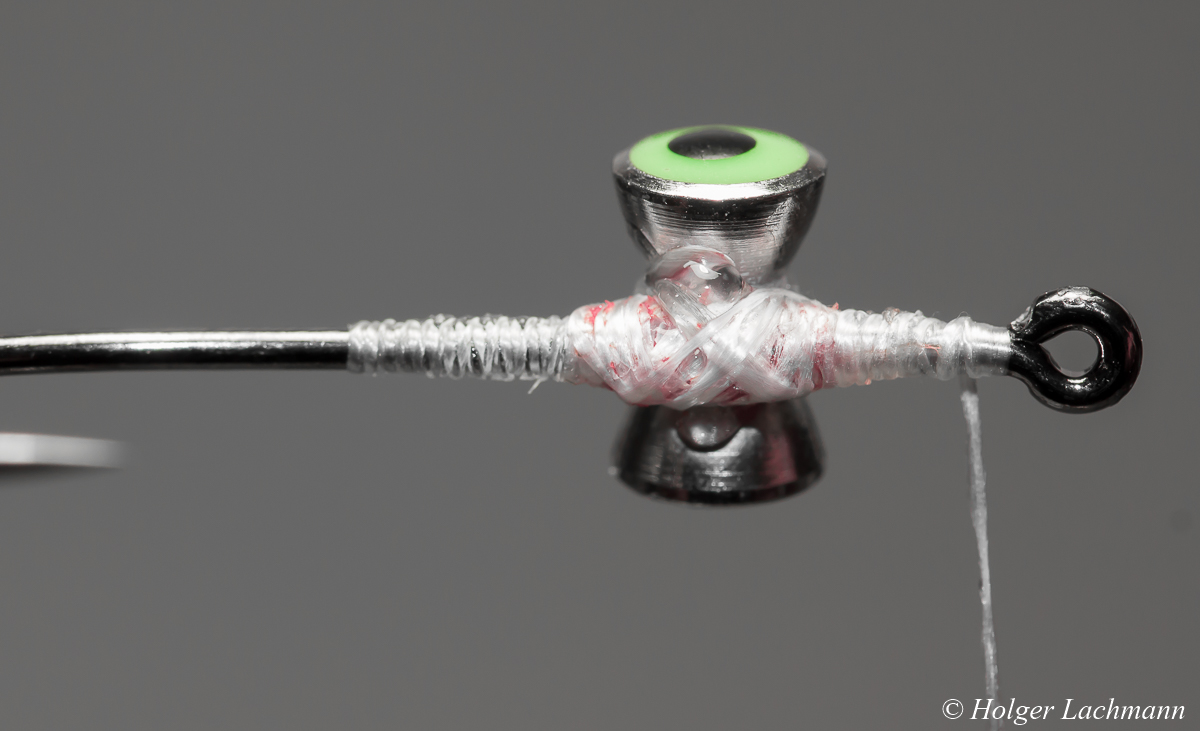 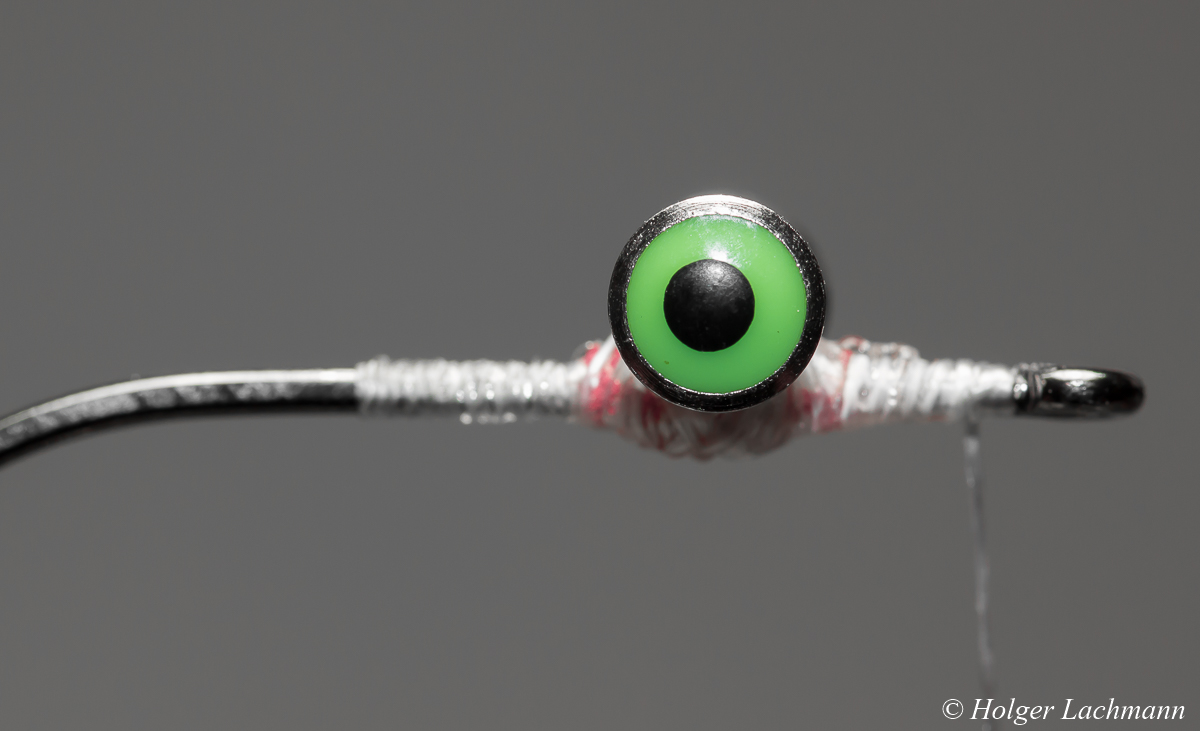 That’s it! The dumbbell eyes will stay there forever! Now throw them to the toothy beasts ! :-D 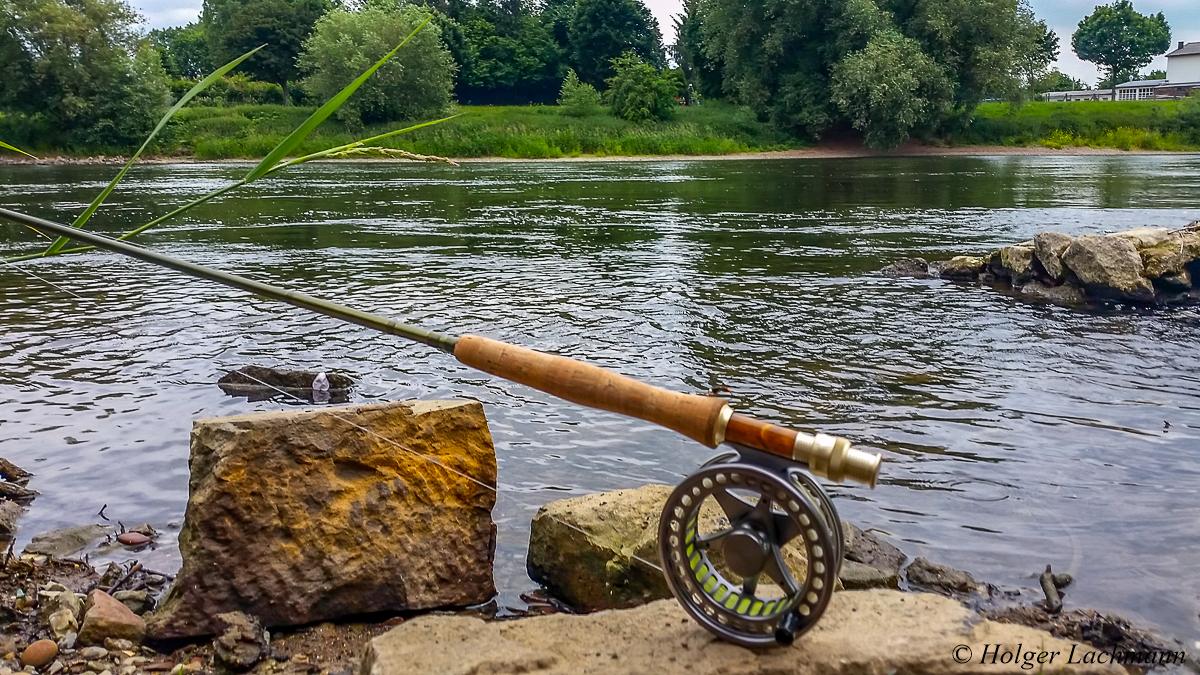 I didn’t got a lot of time today, but I was able to drive at noon for an hour to the river to look for the chubs. On the 5th or 6th cast, I hooked a really nice fish. It fought very hard, like it was on steroids… I was sure, that the chub ruined the pool, but after some minutes I caught some more fish. A really nice short trip. The nymph I’ve used was tied 20 minutes befor I went to the river. ;-)

A perfect big chub in top condition! Flawless! It doesn’t have to be trout or grayling all the time. Sometimes, the big chubs are harder to catch than trouts! 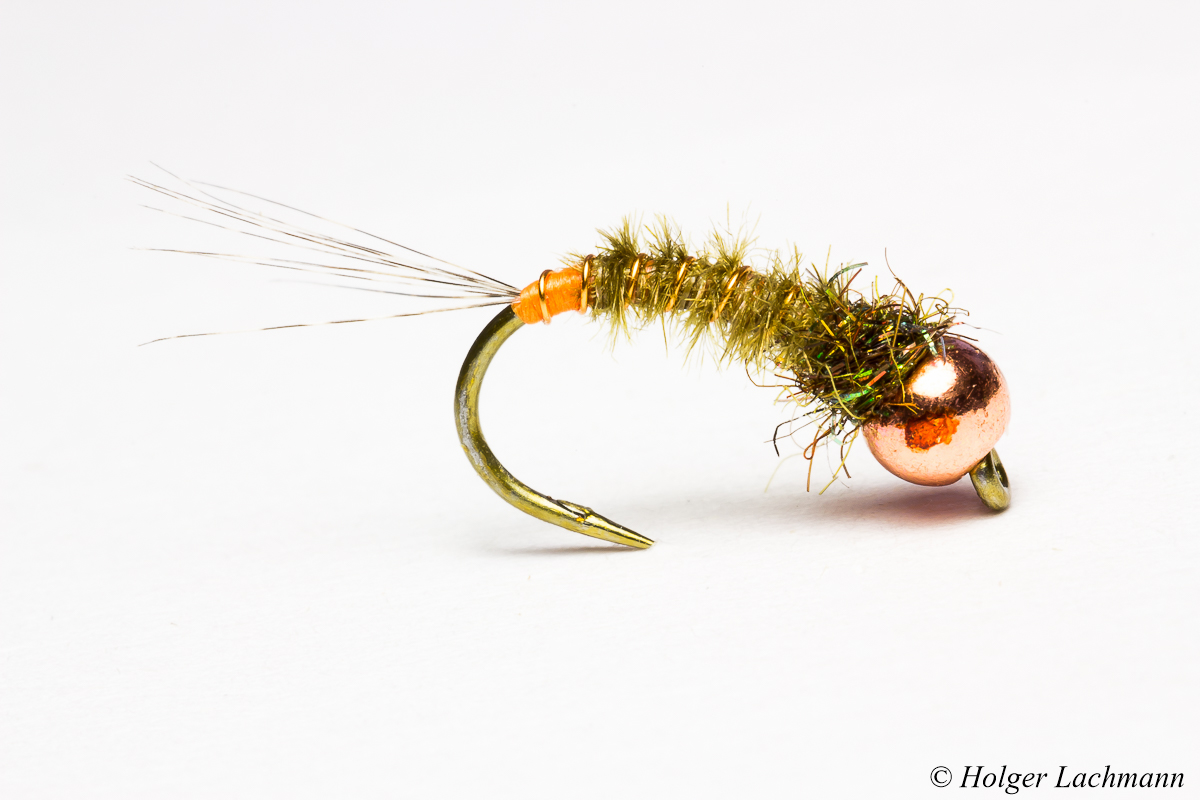 Nymphs with tungsten beads in size 14. 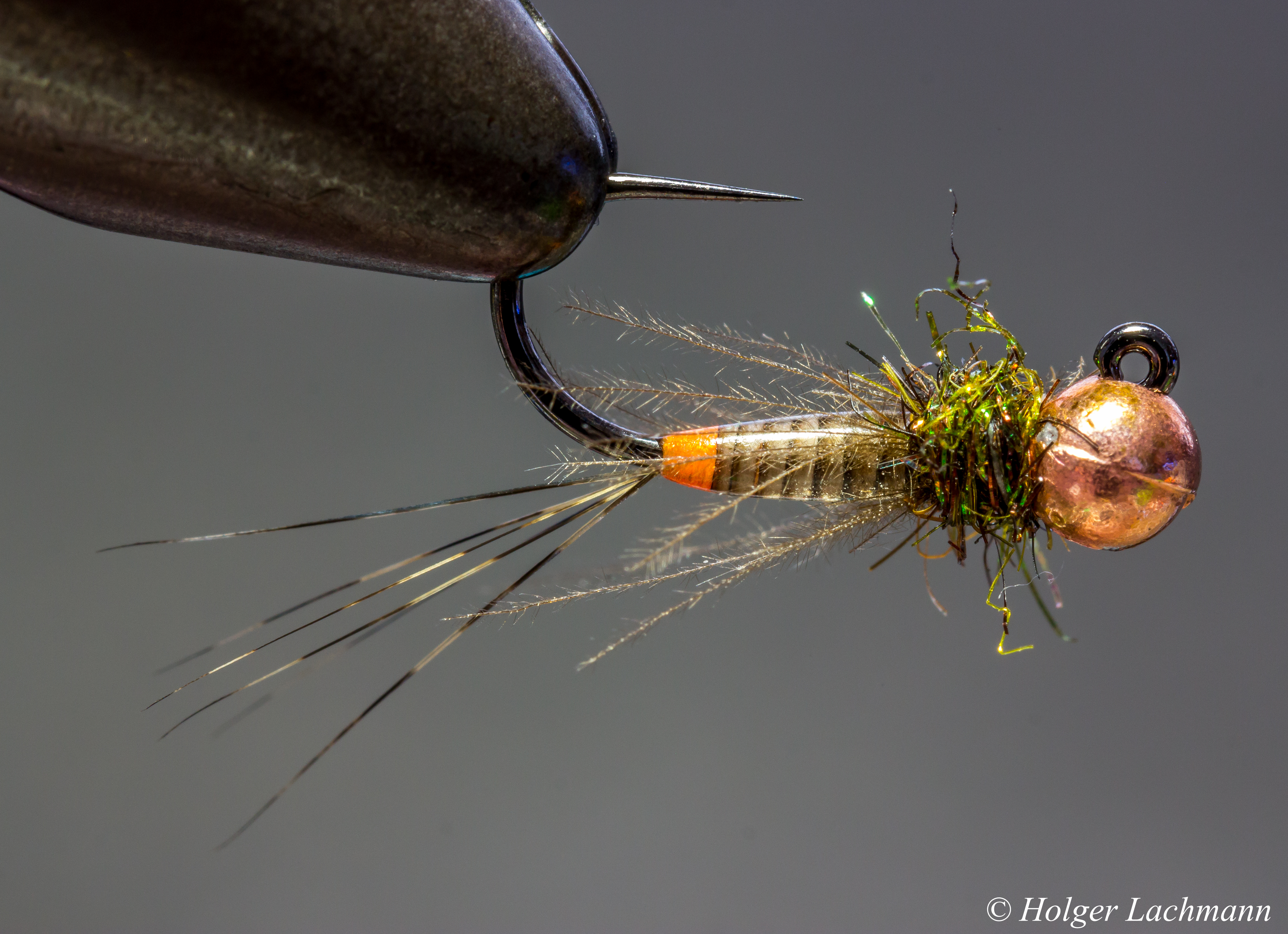 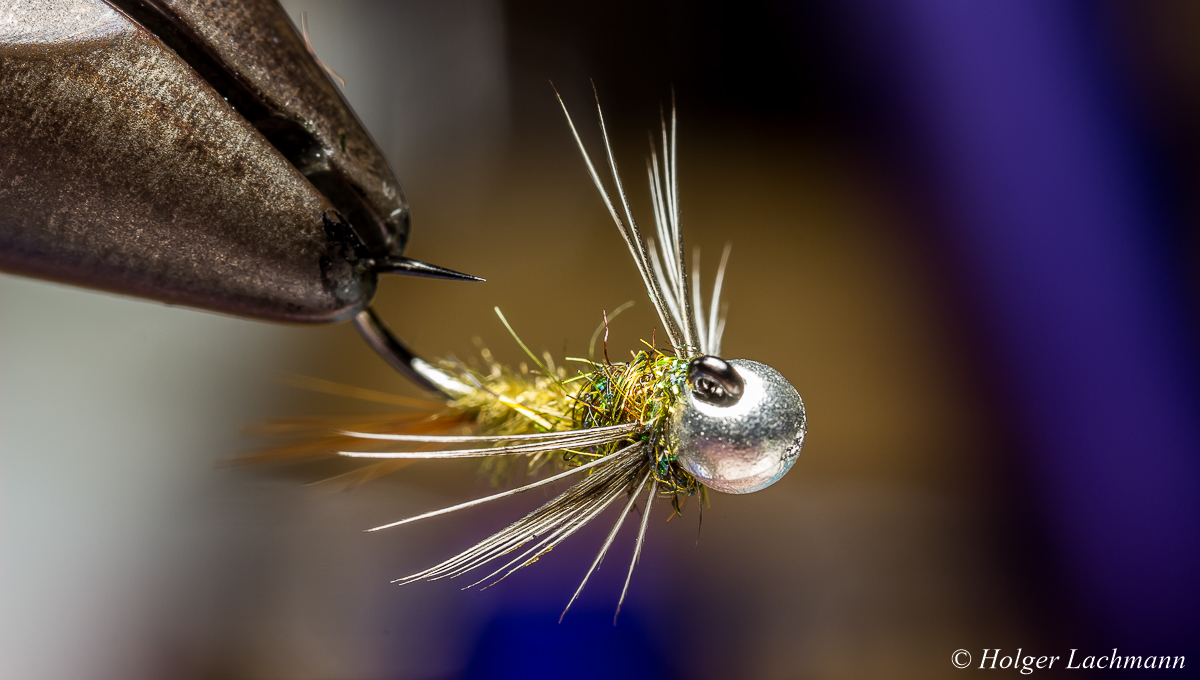 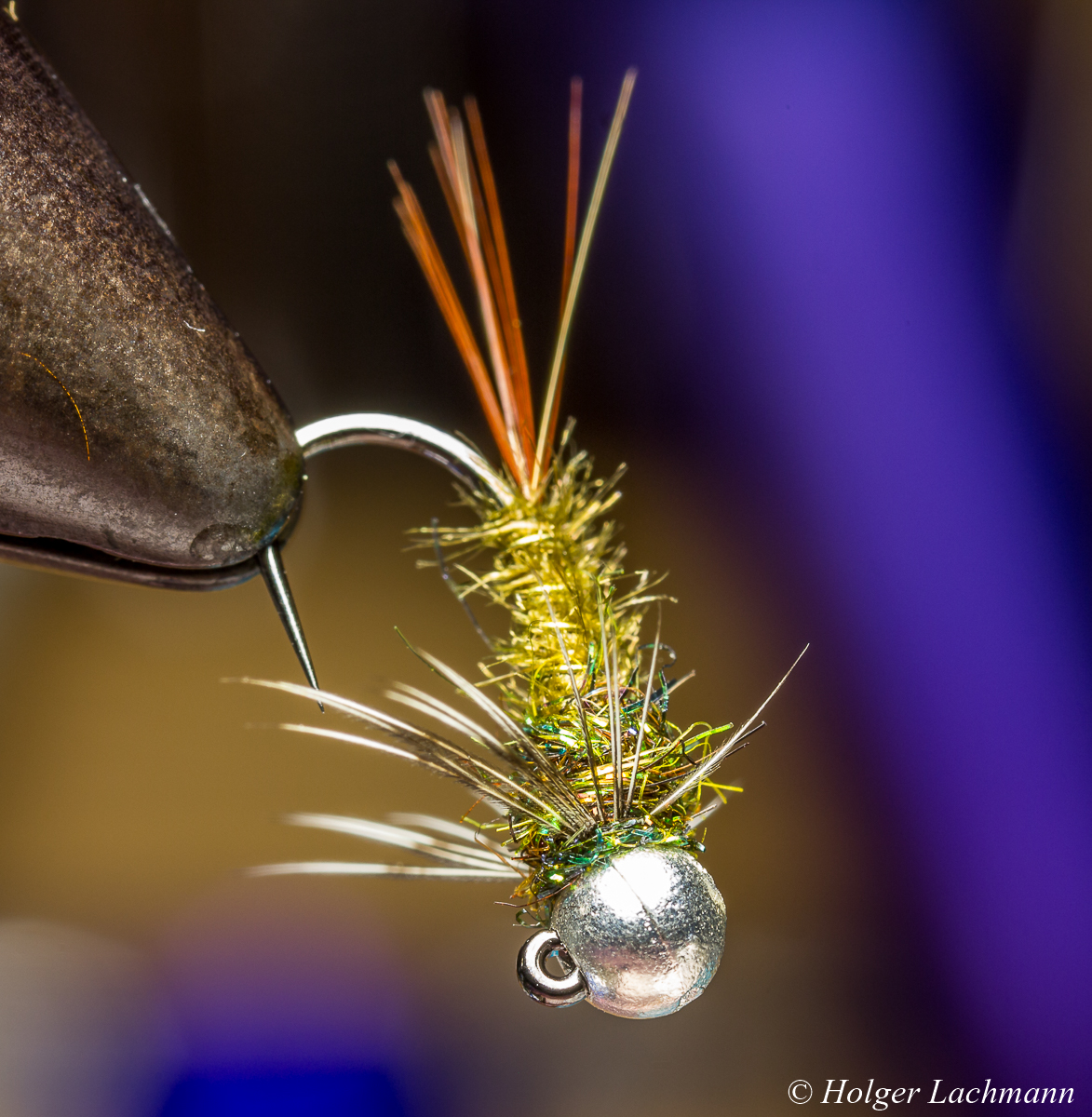 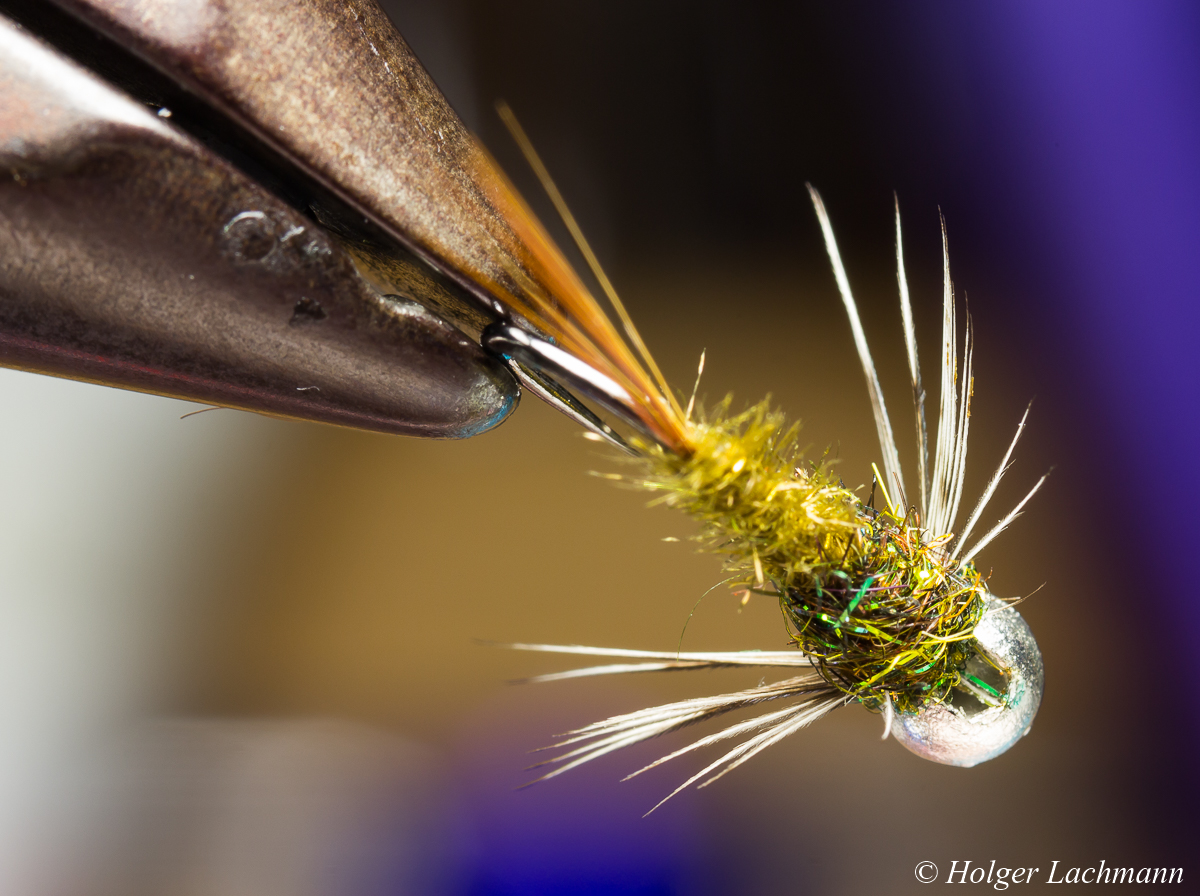 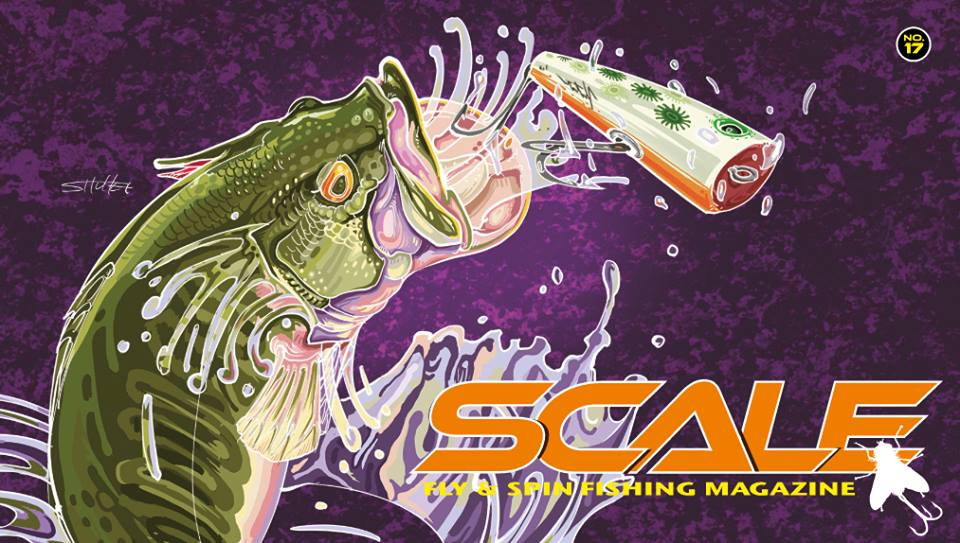 These guys do a really cool job. Check it out! Just click the picture or the link!

You can choose between english and german language.